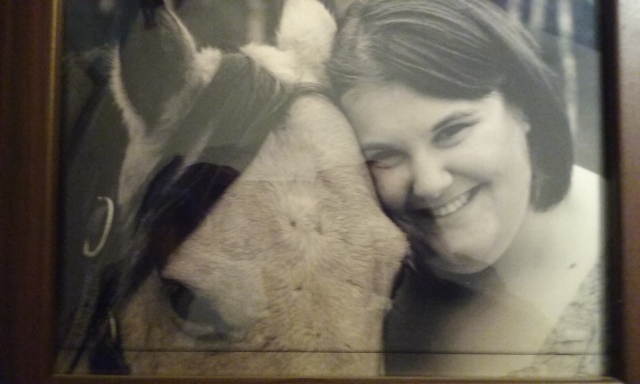 It grew cold.  The northwest wind helped.  She reached up with her left hand and pulled her stocking hat lower, wiped her nose quickly with the mitten hand, tucked her chin and kept walking.  Counter clockwise.  The universal direction mostly taken when repeating direction multiple times.

Anxiety had crept into her little soul somewhere in the those learning years.  It wasn’t a constant companion, but it stayed within striking range.  It would seep in and her young heart would race.

This was not the first time she had made this walk…but they were all different.  It was a walk made in love for love.  Her horse was colicing again.  The second time in  the last two months.  Horses can colic for many reasons and the intestinal disturbances can range from minor to major…excepting that one thing is imperative.  The blockage preventing gastric normalcy has to be removed.   As the pressure of the impairment builds, a horse attempts to roll to relieve the pain and this in turn provides a chance for the intestines to be knotted or twisted.  Then animal would be in a more vulnerable situation. One would be talking: Operation;  the only way to unwind them and the odds of recovery were maybe 50/50.

How does a young one understand moods at all?  They are just there, the makeup of the nervous system?  The component of emotions that scientists call subjective feelings refers to ways each individual experiences feelings. This component is the most difficult to describe or measure. Subjective feelings cannot be observed; instead, the person experiencing the emotion must DESCRIBE it to others.  Each person’s description and interpretation of a feeling may be slightly or greatly different. But ask one that is having an attack upon their emotions to describe it!!  Are you kidding? They are just trying to get through, the description might come later.

When she noticed Amigo standing, eyes molted, she thought he was ‘off.’  She grained all three horses.  Amigo did not move.  His coat was dampered with dirt.  He had been rolling.  She finished giving the other two their hay allotment and moved to her little buckskin.  Slowly and evenly she stroked his nose and behind his ears.  He lowered his head but no knicker of acknowledgment emerged.  He was in pain.

Her rock during those early years was her mother.  Together, in prayer and talk, they pulled the “hooks” away.  It was a tiresome task and both would be exhausted if it was an extreme bout.  The courage was in not allowing the development to ‘arrest’ her totally.

She was whip smart.  She did not rely on this, though most would die to have such intellect, but leaned heavily on a faith; one that she had begun to maturate and matriculate to; Christianity.  Yes, the crutch of the ‘uninformed or stupid.’

Her eyes would cloud over and become dull.  No manner of talk dug past.  She was on her own to collect herself and push past. The medical field provided some relief. Chemicals can supplant the task.  She clamped hard on her mother. And Jesus.  It was Jesus and Mom who she turned to when she could not find the ‘light to turn on’ to chase away the darkened torment.  They were her ‘raft.’

Colic.  Her heart sunk.   It was the unknown of colic’s temper which always provided a path to her anxiety. She shuddered.  Alone.  She had noted the dirt as she had approached, matted in the lightness of his coat.  It was her hope that she be allowed to complete the feeding and get the chickens back to roost before he tried rolling again.  The vet was on speed dial.  They could be out in a couple of hours.  Or more.  Darkness would come.

Sadie gathered the grain buckets and went to the tractor garage.  She backed it out and then grabbed Amigo’s halter.  The vet would need the lighted area to examine him.  All three of her horses were like big, very big, lap dogs. They ‘ran’ the pasture without halters, came as called.  If stubborn, rattling a bucket with a handful of grain provided the amphetamine to get stimulate them home.  As she emerged, she placed the halter on the round pen, a separate pen next to the fenced pasture, and went to get warmer clothes.  She could not think right now how tired she was.  Work and school all day.  She had to muster up and do what needed doing, not because but because of.  She exited the house with proper late winter outwear and went to her horse.  The bays looked at her as she haltered Amigo, curious but not curious enough to disturb their eating.  The two exited the pasture and moved into the circle.  Sadie listened and could hear gurgling gut port side.  Now she prayed that as she walked the blockage might be jarred and a natural release would commence.  Walking did two things, three actually; it could jar the blockage allowing the waste to pass, it kept an animal from lying down and rolling, twisting the intestines (if they were not twisted already,) and it allowed a person to do SOMETHING!

A cell phone was never far from Mom.  It was there to take ‘those’ calls.  Yet, never was there an allotment for a situation to overcome what each the day was to be.  Events still occurred which had to be worked through.  The phone calls were not automatic.  Unless critical.

It was Sadie who as she developed her base began to think through and decide upon what she could do, what she could attempt, and what she could ride out in a river of tears.  She found love from her family, immediate and extended.   An elderly woman who in her late sixties or early seventies got Sadie involved with handicapped children who used horses as therapy.  She loved working with them.  Pat.  She treated her with normality, as a friend.

There was the small Christian school she attended where the teachers and staff encouraged and understood the milking of the disorder that at times needed to be done.  And there were her gifts of singing, art, and intelligence. She sought any and all to diminish the effects.  Mostly, her faith grew.

She prayed some.  Spoke soothing words.  Watched the ground silently.  Twenty minutes on, twenty minutes off.  Her mom would be getting home from work a little later that evening, so she really had no relief.  Dad.  He was lucky to manage the circuit on his own without falling.  He too would be late.

She finished the first run and opened up a patio chair taken from the garage.  She sat quietly and watched.  He was in pain.  The ‘sitting minutes’ went by quickly.  The smart phone said it was time.  She gathered herself and gently took hold of the harness.

A friend recommended homeopathic opportunities and Sadie became immersed in the ability that this might take away some of the chemical aftereffects from her prescriptions. Together they brought a neutrality to her existence which gave her breathing room to perform to the standards she desired.  She had gained friendship with some families that greatly enhanced her.  And her faith grew.

The hour grew late.  Darkness came, the vet delayed.  Mom arrived.   Now she had someone with her as they waited out the scenario.  Mom began to take a turn in the pen, giving her needed relief.  She stayed in the chair when she was not walking. Always there.

The vet showed.  He was familiar with the family having come on a few other occasions when Amigo or one of the others had coliced.  They took him into the garage and the vet began the processes of shoving his hand inside through the ‘back door,’ this after putting on a long plastic glove, shoulder length, doused with a jell. He began his investigation.

When she decided to make the public proclamation of Faith, she asked her Godfather, an ex- rogue hockey player born to Christ later in life to do the ceremony, in the river down from the house, with a select group of family and friends attending.  She wanted it to be an intimate celebration which for her would hold deep meaning.  It did.

The vet and his assistant found no twisting nor could they find any blockage as far as he could be reach.  They had given the 18 year old horse medication for pain, but he still showed degrees of agitation.  The eyes remained bland. The Vet patiently went through the developments that could be the source.   The options beyond operation had already been employed.   They had forced down his mouth a liquid solution meant to loosen blockages farther up the intestines, injected pain relief as well as antibiotics, but they could only speculate as to what had caused this second circumstance in such a short time since the last one.

While all around her friends and family were off to college, having babies, or pushing off to whatever their next step was, she had taken a full time- part time job at a daycare, the 6:00 a.m. to 3:00 shift.  Torturous for any teenager, the time and the job.  Minimum wage.  She kept it for four years.  It was in the third year when she began taking classes at the Community College; hand signing and art were her favorites.  She worked hard in all of them and it was after her second year when she was asked to join the Phi Theta Kappa Society, one which members had to maintain at least a 3.75 GPA.  She carried a 4.0. Her parents attended the low key celebration, proud.

Her dad came out toward the tail end of the conversation.  He seemed gruff and a little agitated.  What were the options?  They were explained.  He looked at Amigo.  He loved all their animals, had loved those that had departed.  It was hard to see an animal suffering and though he never liked it, it was always his desire to say goodbye to them and take care of the deed.  It was not the cost, but the responsibility he felt.  The family always had the last say, so some left by the needle in the sterile confines of the ‘room, one of the family holding them, and others by his side on their land.

He looked at Amigo.  It just seemed time.  And the vet understood.  Operating was not an option.  There was no money for that kind of cost.  Dad said his piece and left, the decision his daughter’s to make.  She choose to wait.

Sadie had become a young adult who understood responsibility and the decisions it brought.  She took ownership of her anxiety. When anxiety or depression strikes, there accompanies a thought, or desire, to be gone to another level, to hide, to extract away.  Sadie had faced this.  Always she had come out of the tunnel and continued to seek the next day.

She and her mother continued walking until early the next morning.  Then they left. Amigo.  Her horse.   Sunrise would state the next step.

She prayed that night.  “God, either let whatever Amigo has become acute so that we must put him down quickly or leave him with us to be past this…for a long time.”

It was a beautiful sunrise.  Dad had gotten up at three and could see the buckskin standing in the pen.  He waited until early light with the yellow orb poking its northern edge past the skyline.  He went to see. Amigo nickered at him.  There was a packed down clump of dump where he had excreted himself during the night.  The blockage was gone.

Sadie awoke.  She went to see her horse.