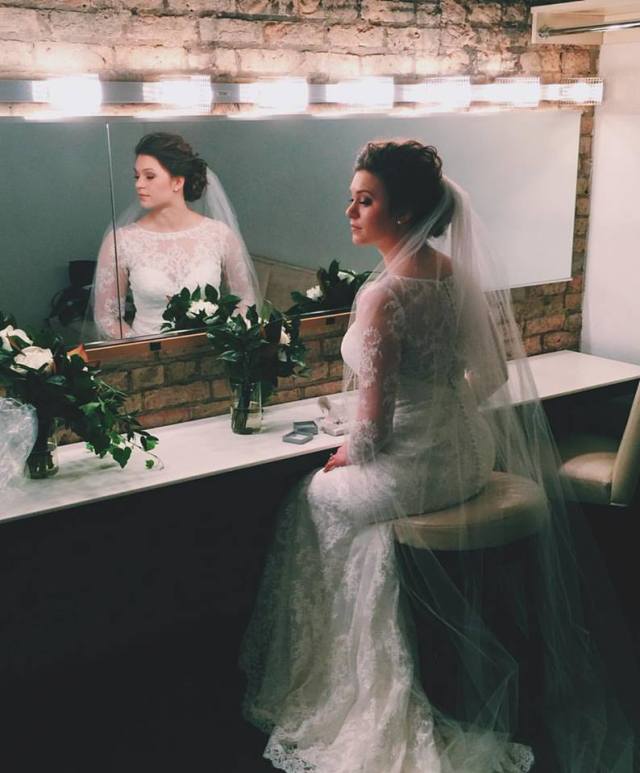 It was a day to ‘float.’  My arrival was the last entry for any or all of the wedding party.  I had no real responsibility other than to stay out of the way, make sure I was on my mark when Ellie came through the door, crook my arm for her’s to slide through, wait for the dress to be fluffed in back.  Then move forward.  Slowly.  I had two words to say after the saunter down the white aisle; “Amy and I.”

I was ‘in a good place,’ in that my emotions were  in an acceptable range of amplitude. I felt peaceful.  No real excitement…yet.  I suppose one could say, serene.  It sure was different from anything I had experienced before.  As if the nerve endings all decided to put up stop signs and let me observe without experiencing anticipation.  In the moment without knowing what the moment was!  Drifting but anchored.

I had gone to ‘stilts’ (crutches) during deer season, cutting that activity off.  The right leg finally grinding to a halt.  The pain had abated some as I worked to graduate from the two stilts to one in anticipation of the ‘walk.’  My goal, if possible, was to use a cane.  Her elegance deserved it.  No, more, but reality has a way adjusting.  I had abandoned the idea to walk without “helpers” on the merit it would not happen.

Funny how an old old downtown storage facility, the oldest one in the country, was transformed into a throne room of tranquil royalty by the hands of love.  After the endless cycle of pictures, formality accepted, I stood on the old staging area and swept the wedding location with my eyes.  Soft white lights surrounded the flood lights to damper the whiteness.  Neatly arranged white padded chairs were set in semi circle style separated by an isle.  The ‘focus area’ was pillowed with flowing, sheer white draping.  The red brick tone styled in behind. It was a picture waiting for the artist to paint in the final pieces.

I was familiar with ‘stilts’…too familiar.  I could pick up a toothpick with them if need be!  But not for my daughter’s wedding.  I needed to get to the crutch and each day was a workout.

I knew them all, one being my other daughter Sadie.  She was ‘best lady’ or as they say in normal English, Maid of Honor.  How the bridesmaids dresses were chosen to tone with the facilities decor was mesmerizing. Each simplistic in grandeur.  Deep brown styled to each lady manicured in a fashion as to be beauty queens.  Her sister and friends.  But to my eyes they were princesses supreme.

It was in December that the ‘stilts’ were put aside for brief periods and the cane employed.  I was thankful and hopeful.  A dear friend came along side and kept by my side, being there.

The guys…guys are harder to spiff up to the degree the ladies are.  But they certainly complimented this fiefdom well; with light grey suits, dark ties and lightly shaded brown shoes lined in black.

Happiness goes so far in employing image and joy takes that and molds it to another level. The footmen were ready as were the ladies in waiting.  The procession would begin soon.

A few minutes each day in January I would take steps with no ‘lean tools.’  Not many but some.  There came a day that I went up and down the hallway for about five minutes.  The pain afterward was sharp, but I had done it.  It was still the cane option, but I had walked unabated.

Just before pictures were taken, at my request several weeks earlier, Ellie was brought out for me to meet her in her dress  I had never seen it. The Photographer had me face an old metal wheel standing up against the brick wall in the Foyer.  I was to wait until they said to turn around.  All said I would cry.

What is it in the emotional system that keeps one from breaking down in total love? Because my heart actually skipped, signalling the tear ducts to let loose, a slow draining down the cheeks signifying unabated love.  She was more glorious than any of the Elf queens in ‘Lord of the Rings.’   She was angelic.  The happiness tears squirmed down one cheek of hers.  I held her.

Cheol Oh brought in Grandma and Grandpa.  Their countenance one of excitement held tight.  He then retreated and reemerged with his parents, Jung Woo and We Jung; he stoic and she blinking back tears.

All were becoming excited, you could feel it.  These were truly friends and family.

How does one describe his wife when she literally beams in happiness inside a dark navy blue dress so ‘her’ that I wanted to take her and marry again?  I just did I guess.  Cheol Oh brought her down and up toward her chair.  We made eye contact.  I teared.

I was nimble on the crutches.  The cane was smoothed out.  The walk was a tumble.  I felt good about using the cane.  I used it in the rehearsal and it did not deter from Ellie I thought.  We could make it work.

I was ready to make a go of it.

I had no clue of what happened , but it did.  After the pictures, while in the dressing room, the young whipper snappers slicking up and enjoying the ‘work up,’ my leg throbbed.  It felt weak.  I had the ‘stilts’ with me and for a moment I thought I would need them.  I stared at the wall.  No.  I finished dressing and went out into the hall.  The procession was ten minutes away.  I journeyed to my spot, cane in hand.  There I kept moving back and forth, near one small table.  My leg felt stronger.  The throbbing stopped.  I walked back and forth and somewhere on that path I placed the cane on the table.

The procession began, and I moved, slowly now so to not disturb all eye contact reserved for the princes and princess.  They came, supremely opulent.

The doorway from where all emerged was to the north side of the stage floor.  Entrants would sweep slowly north to south and then make a 90 degree turn to pass the through the guests sitting on both sides of the isle.  The walk down the stage to ‘center’ isle was perhaps 200 feet.  A nice entry pattern.  As each had emerged from the door, the next stepped up for their turn.  All had gone until left standing immersed in white back lighting was my daughter.

I moved slowly to my ‘mark’ and waited, watching her elegance move toward me.  I did not catch her features until she was close enough to take my left arm.  When I looked at her I saw a woman ready to marry the man of her dreams.  Now we were moving, together, slowly, down the white carpet.

I rode a magic carpet. Free!