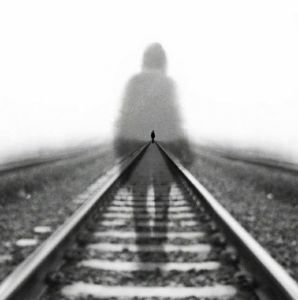 He walked in at 7:30 a.m. for coffee. Almost every day. She made it black, “Navy black.” He had grown accustomed to its dark thickness. It was how he and his father had drank it at the racetrack. Years were now gone as was his father. Where forty years earlier she had prepared a half dozen eggs for each now there was a muffin or toast to accompany the dark liquid. He had aged. As she.

She was so thankful that he was able to come by as he did. It was so much appreciated now that she had moved into the ‘shade of life.’ Eighty. She had lost her husband after 18 years of marriage, too early, but cancer never was good at figures. Four children were trained as she handled the mantle of widowness.

The tracks were behind the house, maybe 50 yards past the property stake.  Trains ran mostly at night.  It was a straight stretch.  They lived near the crossroad.  But she could not remember the whistles. Funny. The Hummmmm was there.  Came in at the 2:00 a.m. hour on the tic. Night after night. The Hummmm would be heard almost a full minute before the ‘clackety clack’ muffled in from the dark. It became the soundtrack for her dreams. Like a cloak of safeness, in quiet deliberation, making shore for another day. She likened it to a friend who would whisper that all would be well. It had stroked her when her husband died. For a time it was the only source of quietness that quelled the varied retro reflections.  The Hummmm stitched the hurt holes and the heart mended.  Her ‘love’ clung to the sides during the recovery.

There was no coffee. The rich aroma he had grown accustomed to failed to greet him. His eyes slowly took in the kitchen. It was missing its warmth. His heart picked up its beat.

She could not sleep. Her body was not to blame, though it had quit on her to the point that the chemical umbrella of protection was sieving pain. She grasped the inevitability that it would accompany her in this stage of life.   It was a new restlessness that poked her. She needed to get up.  Shred the unease. With effort she made the walker and pushed through door.  She stopped in the kitchen, feeling unsteady.  The large chair facing the television was 16 1/2 “pushes” from the doorway.  This she knew by heart.  Her world had shrunk to small understandings. She pushed forward and gained the chair.  With effort she sat and slowly wrapped a quilt.  It was minutes before she turned to the remote.  Picking it up, she felt unsure.  She set it back down and looked at the clock.  A small smile worked its way through the unknown.  1:45 a.m.  The train.  The Hummmm.  It was coming.

He went to the bedroom and found it empty.  Turning, he saw her in her chair.  Sleeping. His heart settled and he moved toward her quiet form.

She waited.  Her life became blurred sensations ‘reeling’ in seconds with accompanying dilation of her children and grandchildren.  They her source of compassion and love which she conveyed so wantingly on any and all.  Oh how she adored each.  That they had prospered was nice.  That they were just plain good satisfied her to no end.  And for that she was so thankful.  The “video” played on.  Majesty and valor were livid colors while tragedy and loss broke down into black and white silhouettes.  She prospered on the act of giving…and loving.  She came from such a family and she swayed in life’s changing climates with an attitude of humble thankfulness.  Simply satisfied with the what not the want.  And a wonderment of joy that she was so blessed.

Quietness now surrounded her.  She waited for the Hummmmm and thanked God for her blessings.

He approached in soft small strides, not wanting to wake.  He looked down and embraced the aged face with his eyes, a face which reflected the strength of ‘being’ that she was for him.  She was his mom.

Now he looked closer.  There was a perfect stillness in her position.  Leaning close, he whispered to her.  She did not move.  Gently he shook her.  Her head nodded and an arm dropped lower.  He reached and put it back in her lap.  It was lifeless.  He stooped lower and looked at her face.  He touched her hair and bowed his head.  Tears formed as he felt her peace.

The Hummmmm was vibrant and loud, beautiful in its majesty.  Her eyes had been closed. Now they flicked wide.  Oh, the Hummmmmm!  Her restlessness abated.  Peace flooded as she felt the unbelievable sensation of perfection…love.